I was very fortunate to have spent my youth growing up in, what was in its time, Queensland’s most beautiful gardens, The Oasis Tourist Gardens in Sunnybank where my father was the manager.

After finishing my senior high school I did a year of business studies at the Queensland Institute of Technology but all the while my heart was longing to be outside getting my hands dirty. I soon gave my studies away to pursue my love of gardening at the Oasis, where I became head gardener with a staff of 8. I spent the next fifteen years enjoying what I considered the best job in the world. It was here that my passion for tropical gardens grew and it was not long after that, that I began making collecting trips into the jungles of Malaysia and Indonesia for rare and unusual palm seeds. In 1976 I co-founded the Palm and Cycad Society of Australia and was Foundation President for the next 6 years.

When my parents retired in the late seventies I decided to move on as well. So I bought the old family home on a traditional quarter acre block which was only two streets away from the Oasis. Shortly after that I started to convert what was a rather ordinary, neglected garden into my own tropical paradise.  For the next 20 years I worked as head gardener at the Sunnybank Private Hospital; the highlight of which was winning six major gardening awards as part of Brisbane City Garden competition. My time with the Sunnybank Hospital came to a natural end as my desire was to start my own fulltime landscaping business.  My overseas trips to collect Cordylines in the 1990′s led to the foundation of the International Cordyline Society of which I was Foundation President. My trips took me to exotic locations like Hawaii, Tahiti, Thailand and Bali; all the while making wonderful new friends. It was at this time that I decided to build my own plant quarantine house which enabled me to introduce many new species of Cordylines into Australia.

I have just celebrated 25 years of opening my gardens to the public and in that time close to 100,000 people have visited the garden.  The Garden has featured on many television gardening shows including Burkes Backyard, Gardening Australia and Jamie’s Durie’s Australia’s Best Backyard’s. Don Burke described the garden as the ‘Best Tropical Garden in Australia’ while Jamie Durie said on his show, Australia’s Best Backyards, that he thought it was one of the best tropical gardens in the world. These days my time is spent doing Tropical Garden consultations which take me all over Australia and overseas (most recently) I have been employed to consult on two resorts in the south of Thailand which although being a challenge, were immensely enjoyable.  I love sharing my knowledge with others and am often invited to speak at various gardening functions. A highlight several years ago was an invitation to speak to the Vila Garden Society in Vanuatu. A regular speaker at the Buderim Ginger Festival also gives me the opportunity to promote tropical gardens.

I love seeing other people’s gardens and was recently invited to judge the ‘Best Tropical Gardens in Cairns’, a promotion by the Cairn’s City Council. Several years ago I wrote a book which included a forty minute DVD entitled ‘Simply Gardening’. More recently, the Garden has featured in a beautiful coffee table book by Graham, Sandra and Linda Ross entitled ‘Gardens of the World’. The latest book in which the garden has been featured is called  Tropical Gardens Hidden Exotic Paradises which includes gardens of the most prominent Tropical garden designers in the world today. 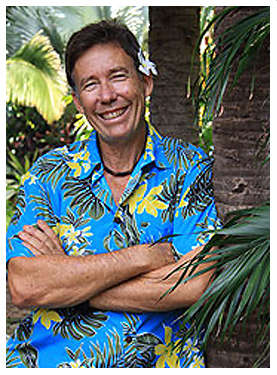 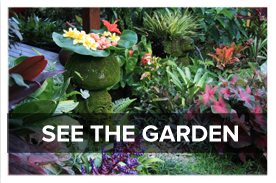